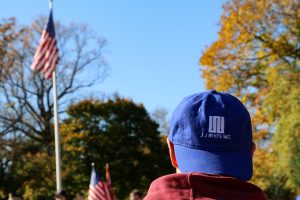 At JJ White, we often look for ways to give back, especially to our nation’s veterans. When we were approached by the Saving Hallowed Ground Foundation to help replace a stolen flag pole at a veteran’s cemetery, we knew we had to be involved.

Gene Hough, co-founder of the Saving Hallowed Foundation, was invited to take a tour of the Mt. Moriah Cemetery in 2012. He discovered that the tranquil site located in both Philadelphia, PA and Yeadon, PA was missing something; a flagpole. The pole had been stolen for reasons unknown some years prior, and replacing it would take a great deal of work and patience.

Saving Hallowed Ground made it their mission to return the American flag to the cemetery and went to work on finding the resources to make that dream a reality. After securing donations for the pole and flag, Hough had to find a patriotic contractor to donate time and labor for the 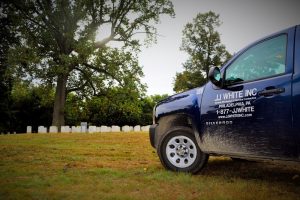 flagpole’s construction. That is where JJ White Incorporated comes in.

“When I was approached about this project, I didn’t even hesitate,” said Jim White, President of JJ White Incorporated.

Less than a week and half after starting the search for a contractor, JJ White was on board. The permit process proved to take a bit longer, but the determination showed by all involved finally 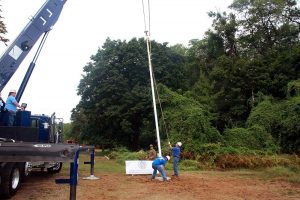 got the project underway. In September 2016, a six man JJ White crew removed the foundation of the previous flagpole and built a new one in its place. Soon after that, the new flagpole was raised and awaiting dedication.

On Nov. 12, the day after Veterans Day, a dedication took place to commemorate the hard work of those involved in the project, as well as the more than 2,500 brave veterans buried at the site. The United States Coast Guard provided a flyover, and a 20 foot by 30 foot American flag that makes appearances at dedication ceremonies across the country was present as well.

“We have a proud tradition of supporting our veterans through our construction work as well as the American Jobs for American Heroes program. Any time we can help, that’s what we try and do,” said White.