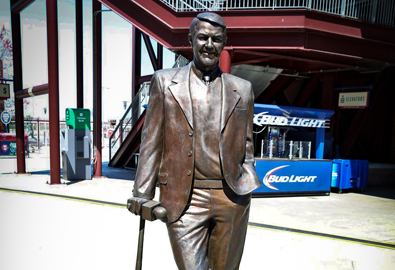 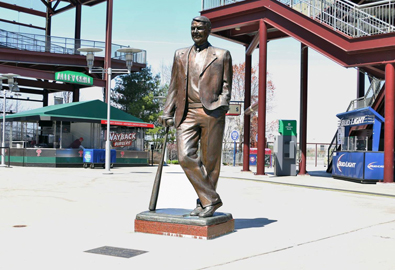 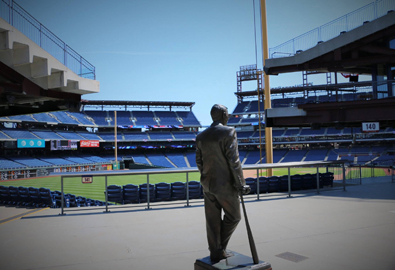 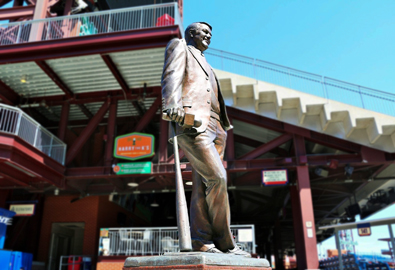 After the passing of legendary Phillies broadcast announcer Harry Kalas on April 13, 2009, fans formed a non-profit, Dear Harry, Inc., to fund and build a memorial statue for the Phillies’ voice. After a tremendous fundraising effort (in which JJ White contributed significantly), sculptor Lawrence Nolan was brought in to create a 7-foot bronze statue of Kalas. Transporting and installing the 88 inch high, 27 inch deep, and 33 inch wide statue was left to JJ White Inc.

The statue was sculpted off-site and had to be transported to Citizens Bank Park for installation. The statue is composed of 12 separate pieces that were welded together, making for complicated crane lifts. The statue’s placement in the Ashburn Alley section of the ballpark made it difficult to maneuver large equipment to the jobsite. The statue is also highly expensive and required great attention to avoid damage.

JJ White crews expertly maneuvered the large statue from Chester, PA to Citizens Bank Park in August of 2011. Through strategic crane lifts that put the least amount of pressure on the welds holding the statue together as possible, JJ White crews were able to lift the statue into place.

In a pregame ceremony on August 16, 2011 Phillies Legends Jimmy Rollins and Steve Carlton pulled back a sheet and unveiled the statue in front of thousands of cheering fans. The statue now rests in Ashburn Alley inside of Citizens Bank Park to honor Hall of Fame broadcaster. We are incredibly proud to have been a part of this project to preserve Harry’s legacy.

Click Here to Watch Video of the Unveiling Ceremony